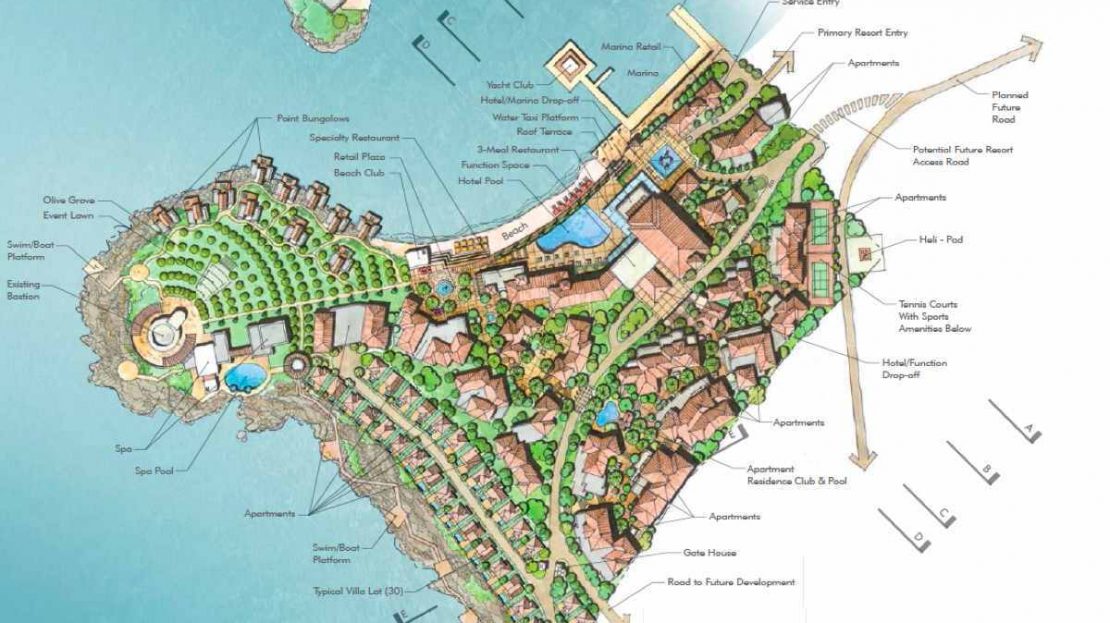 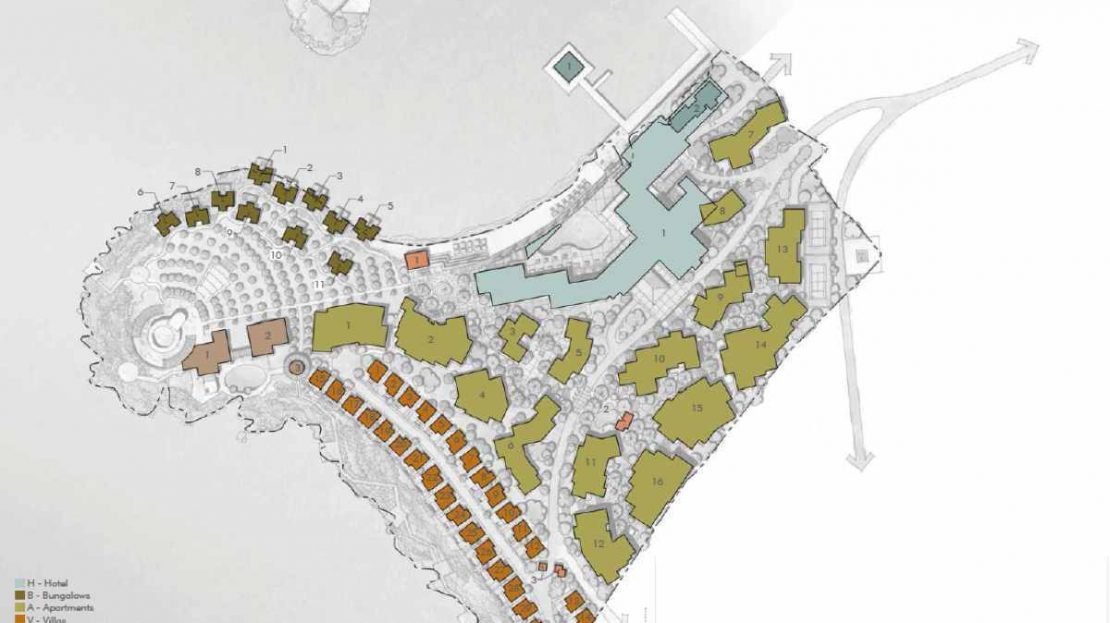 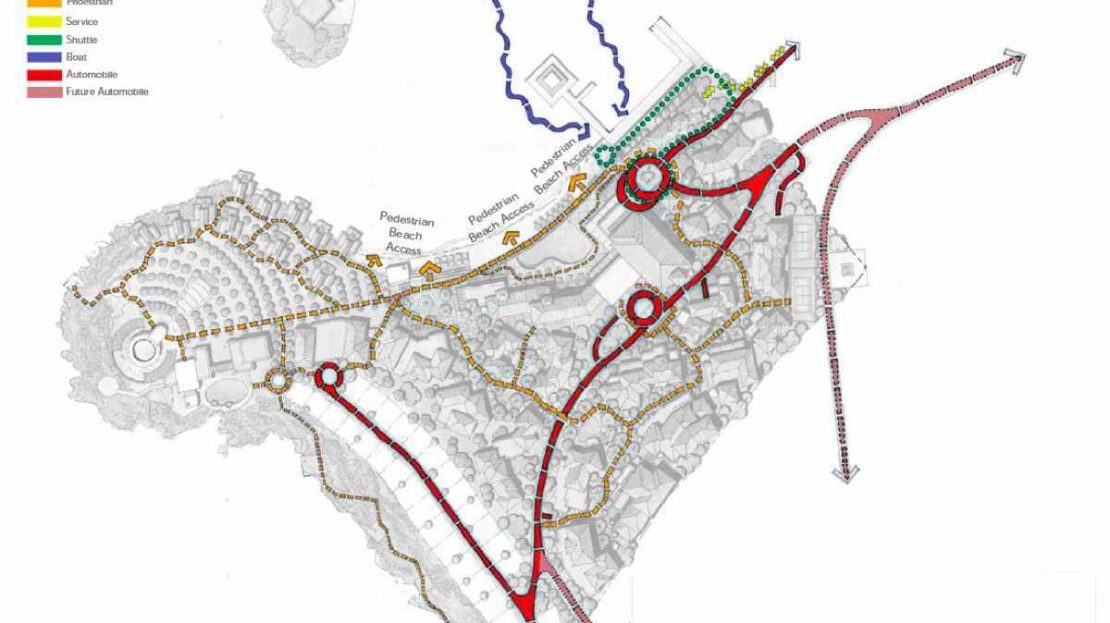 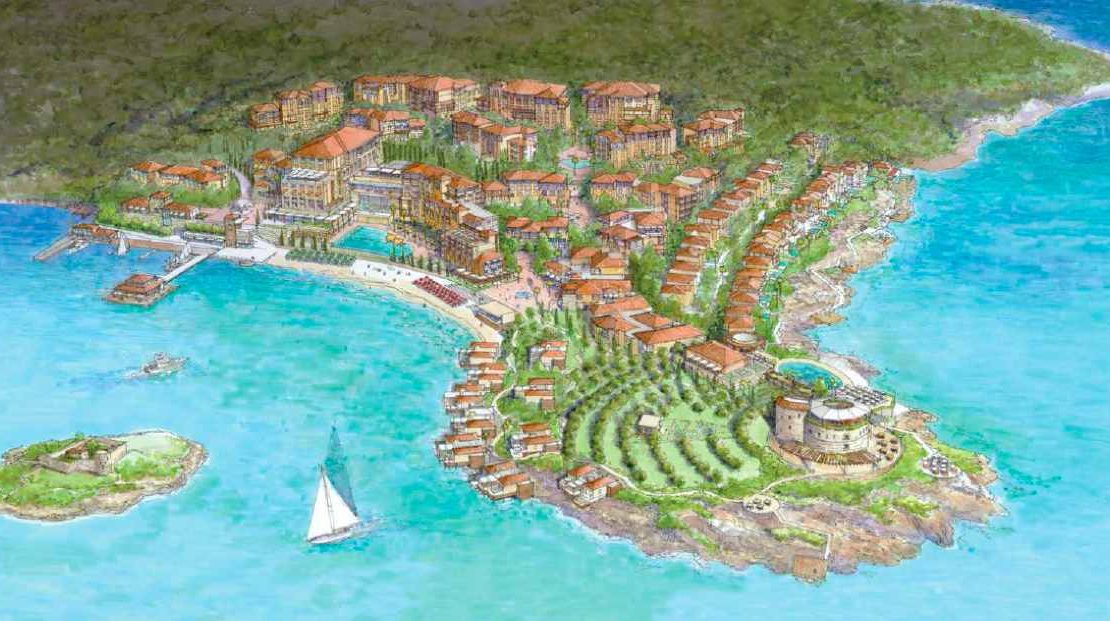 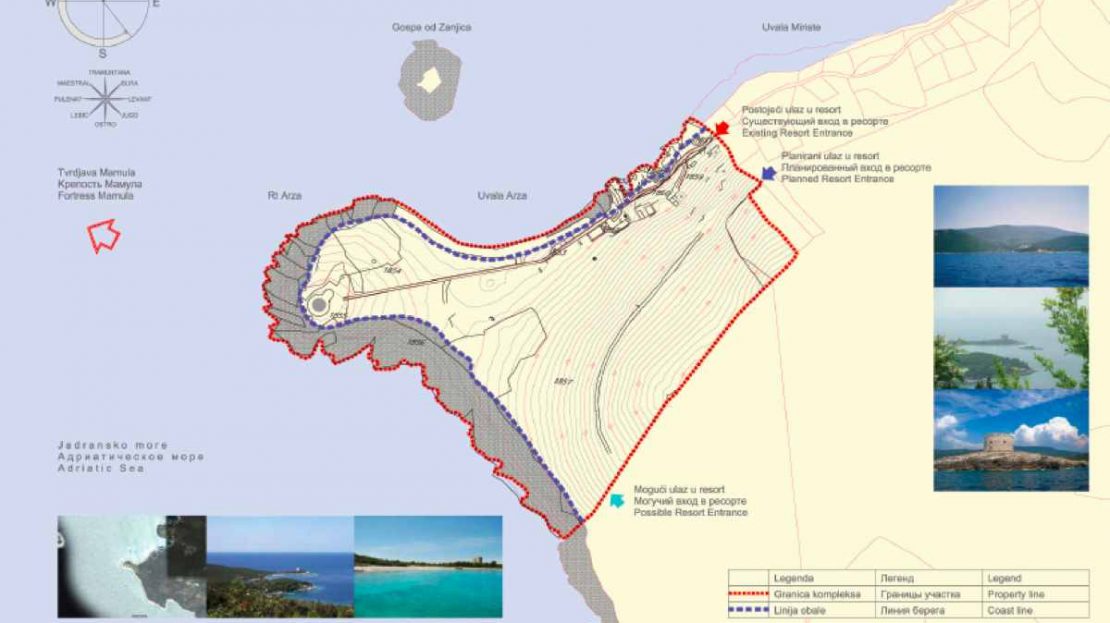 One of the kind seafront large development land plots in the Lustica peninsula with the project for the mixed-use resort with apartments, villas, and hotel on prime location.

BUILT-UP PARAMETERS (subject to approval by the state authorities)

This prime location in Lustica peninsula (Wikipedia) is positioned at the very entrance of the Boka Kotorska Bay, and coupled with Prevlaka across the way, makes the Gate of Boka Kotorska and the important visual indication from the sea. The trademark of the location is the Fortress from the 19th Century, which represents the physical identification of the Cape, ever since it was built.

In the vicinity of this large development land in Lustica, Orascom Development develops 5* hotel on the Mamula island. One of the best restaurants on the seaside Ribarsko selo is located nearby.

One of the most important characteristics of the Montenegrin landscape is the highly variable physical structure of the terrain. On the seaside of the Lustica Peninsula, as a result of geological and seismic alterations, the coastal layout offers rich scenery, varying from high mountains down to the profoundly indented shore. The cliffs spread out the implausible background to the gritty seashore, turbulent blue sea and the villages in between. The rich Mediterranean vegetation also greatly contributes to such a prosperous and beautiful landscape. The typical wind resistance rose of the Mediterranean area affects the airiness of the region, clean air and pleasant surroundings for people to stay. Furthermore, the wider background is plentiful natural clean water springs.

This resort is planned to become the trademark of the entrance to Boka Kotorska Bay, as one of the most outstanding five-star international destinations in Montenegro, sophisticated and of high-standard, standing on the important historical site.

Since the word is about a high category resort, the concept is made upon the compatibility between the traditional spirits of the clime and maximum comfort of the space which is redolent of luxury. Each level of comfort, from functionality to aesthetics, is made by simplicity, wideness and by applying the elements of clear proportion. The integration into the traditional ambiance of the environment is accomplished by implementing the elements of the established Mediterranean architecture of the locality from different time periods: the square-piazzeta as the basic urban element, stone walls as the elements of the local architectural tradition, and secondary elements such are pizuo/stone bench/, bifora/gothic style window/, fenca/fence/, skale/stairs/, ponistra/Dalmatian window/.
The complete ambient of this complex is projected to reflect the beauty and unique value of traditional architecture and adapted tradition towards the modern language and lifestyle, with local identity. The Fortress, nature and the ambient of Resort would allow every guest to sense the rich historical culture which is shaped by centuries-long political and commercial struggle and ethnocultural tradition.

Formation of objects has come out of historical roots of the traditional matrix. In general, the Resort is divided into a residential zone, a zone with public facilities and port.

Residential zone is divided into subzones with apartments, villas, hotel and hotel bungalows.

The hotel is situated in the centre of the site, as the landmark of the complex. Its formation consists of two blocks-wings with the residential units that connect the central block with the public facilities. The position of the residential blocks wings has come out of the most optimal orientation regarding the cardinal points/the sun/ and the sea view. The number of hotel floors is between 4 and 10, depending on the cascades of the natural terrain. The most luxurious block of the hotel is the bungalows, which are planned to be on the exact seashore, on the north from the Fortress.

The apartments are situated as multiple, independent buildings around the hotel. They are planned as two-module apartments with a possible junction.

Zone with villas is positioned on the south side of the complex. It is planned that each villa has its own pool, to have a ground floor and first floor, with two parking spots in one part of the basement. Since each villa is located on the cascade, the wide view to the open sea is guaranteed.

Zone with public facilities: The most attractive space near the sea, with the biggest frequency of circulation, is intended for the public facilities. All facilities are connected with clear pedestrian tracts. Gathering points are the amphitheatre, pizzettas, and “gumna”/lifted up, circular plateau, sometimes surrounded by columns/. Especially attractive trace is from the existing Fortress on the Cape itself, over the promenade and to the central square/ piazzetta/. The Fortress, reconstructed upon the needs of the restaurant, is another special attraction of this zone. The piazzetta is formed by multipurpose objects with public entertainment on the ground level /shops, galleries, cafes, bookshops/ and the apartments on two above-ground levels. The wellness centre is placed in the public zone, near the Fortress, on the main pedestrian walk path, in between the two swimming pools. It has two floors, with a view to the sea from each room.

Water area:
The existing sandy beach is the main resort beach, equipped with all the necessary following contents / the beach club, sheds, cafes/. On the rocky seacoast, which starts northerly from the Fortress and spreads towards the south along the complex, are planned multiple, small, private bathing areas which are to be built on the newly formed and interconnected plateaus. The access to these bathing spots and promenade is possible on many points, by pedestrian walking paths with stairs and through the escalators on the southern part.

Three swimming pools are planned as well. One, next to the hotel, the other, next to the Spa Center, and the third on the very Cape next to the Fortress. The pools are equipped with shades, bars and all the other necessary contents. Tennis courts are planned on the northeastern side of the complex, oriented in direction north-south.

The port is planned on the endpoint of the northern side of the complex, at the beginning of Miriste Bay, which the local fishermen often use as the shelter from the sea storms. Besides these contents, which are necessary for the port, this zone is also planned for yachting club, different shops, clubs and technical services for smaller boats.

Traffic map It is planned to build the two accesses to the complex. The access from the sea is within the port, for both the smaller individual vessels and taxi boats. Car access is planned from the existing local coastal road and from the planned municipal road on the northeastern side of the location.
After the security entrance to the complex, the road becomes the two-way street. Each object is accessible by vehicles, whereat the access to the higher objects is maintained from the main road, while the small individual objects are accessible by electrically powered vehicles through pedestrian and vehicle paths. With such traffic solutions and appropriate slopes, turning radius and road widths, the fire regulations are fully obeyed.

Parking space is provided for each residential unit within the complex, and according to the following procedure:

Pedestrian communications are projected so that the main paths are clearly visible, with crossroads connecting every built point of the complex. The main pedestrian stream ranges from the existing Fortress on the Cape, over the promenade and to the central square/piazzetta/, and then alongside the hotel and right to the port. Aboard the coast, there is a long promenade with the resting points, starting from the port on the northeast and all the way to the plateau on the far southeast of the complex. Circulation is enriched by resting places, sheds with sofas, aisles, benches and different greenery.

See other land listings in Montenegro by EA Properties

You need to login in order to post a review 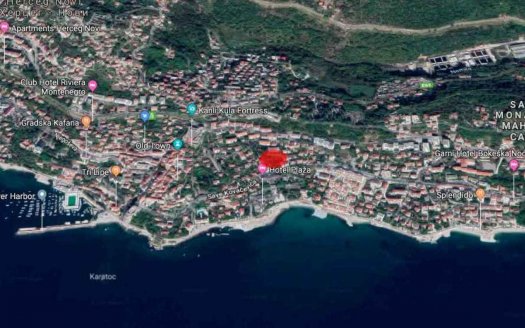 or
Login with Yahoo

Register here! Forgot Password? Back to Login Return to Login 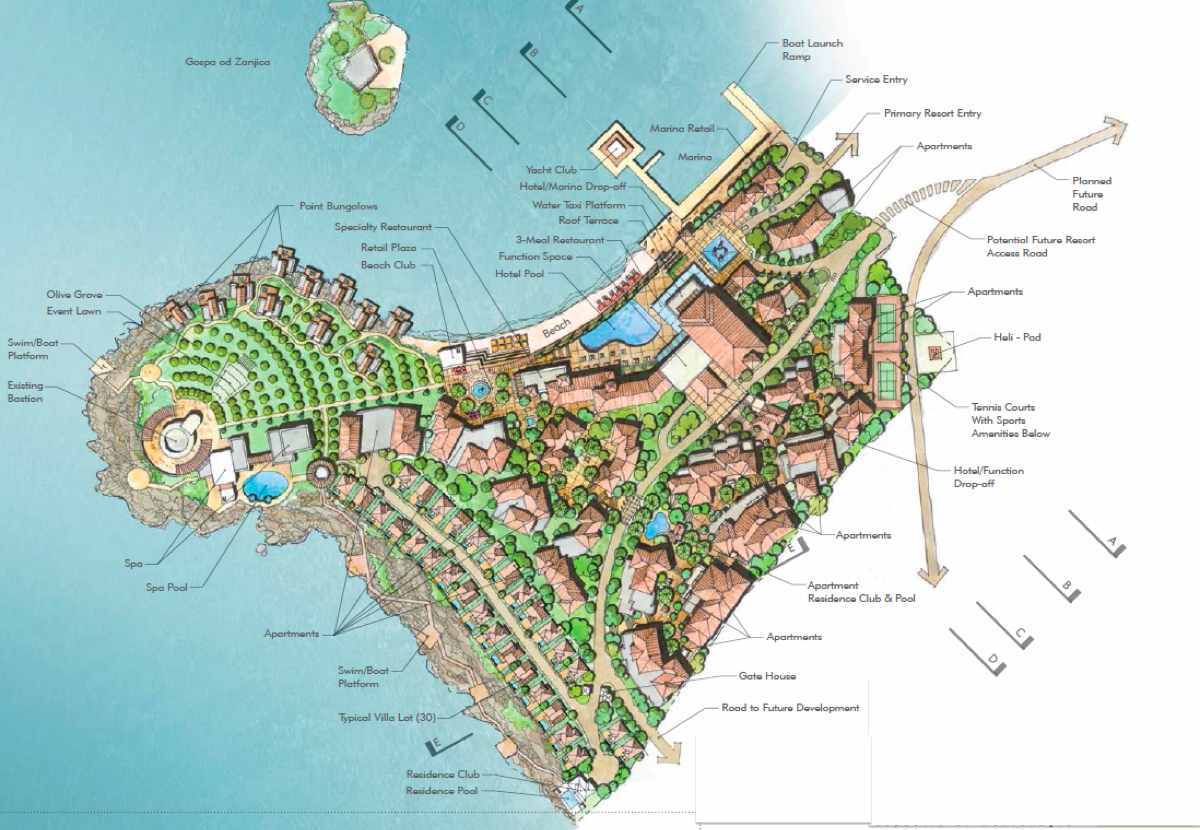 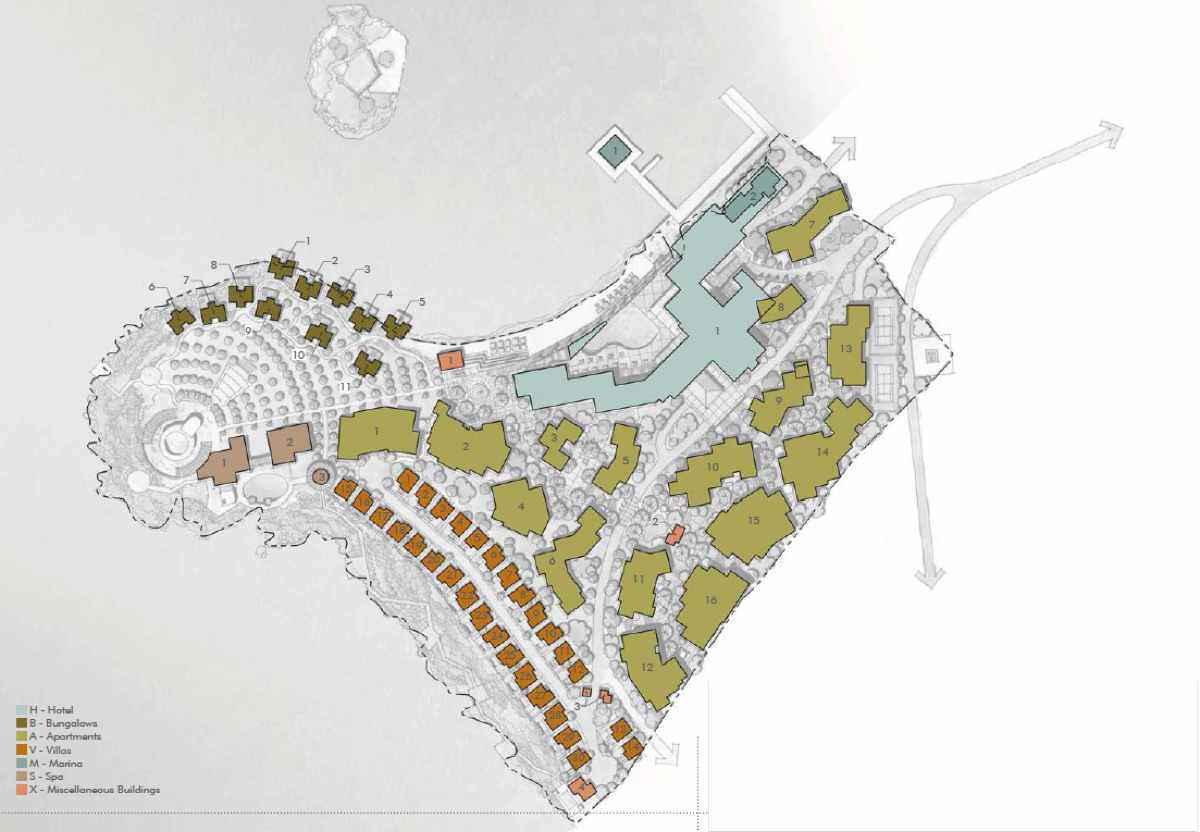 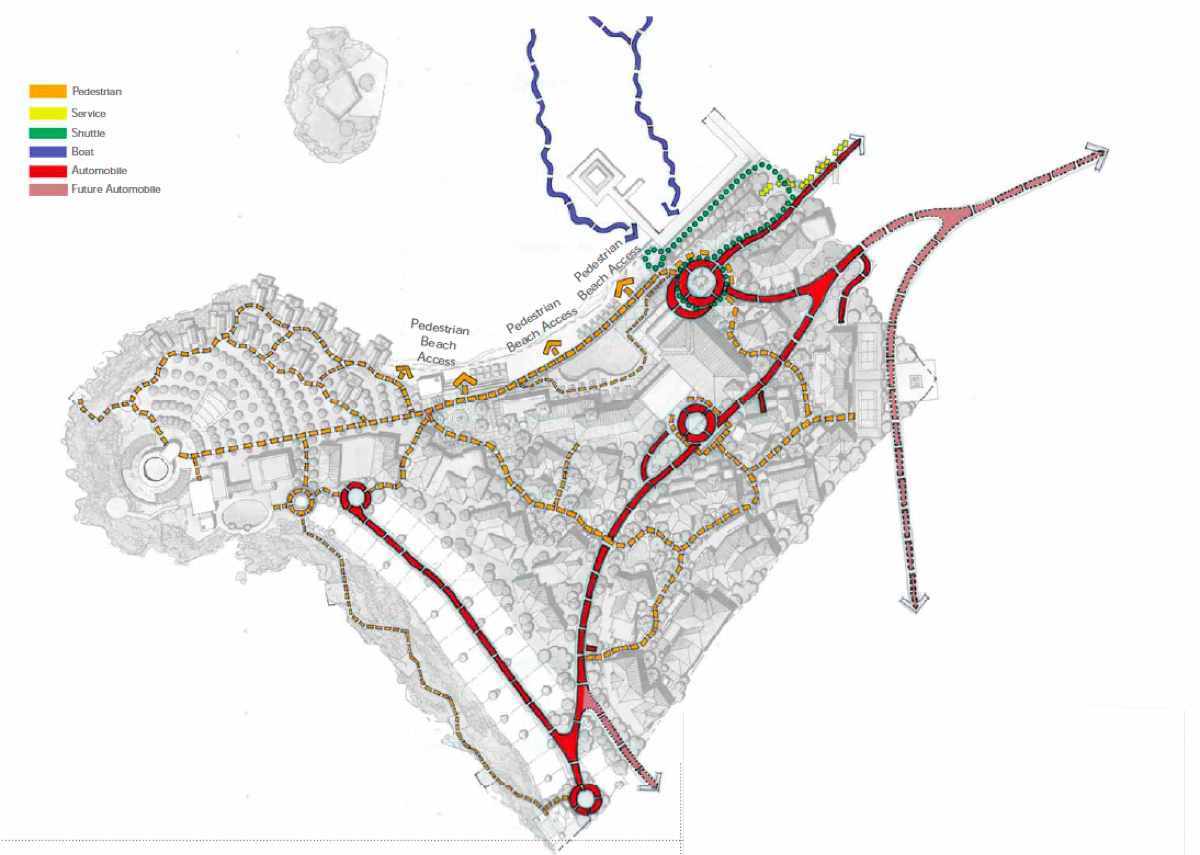 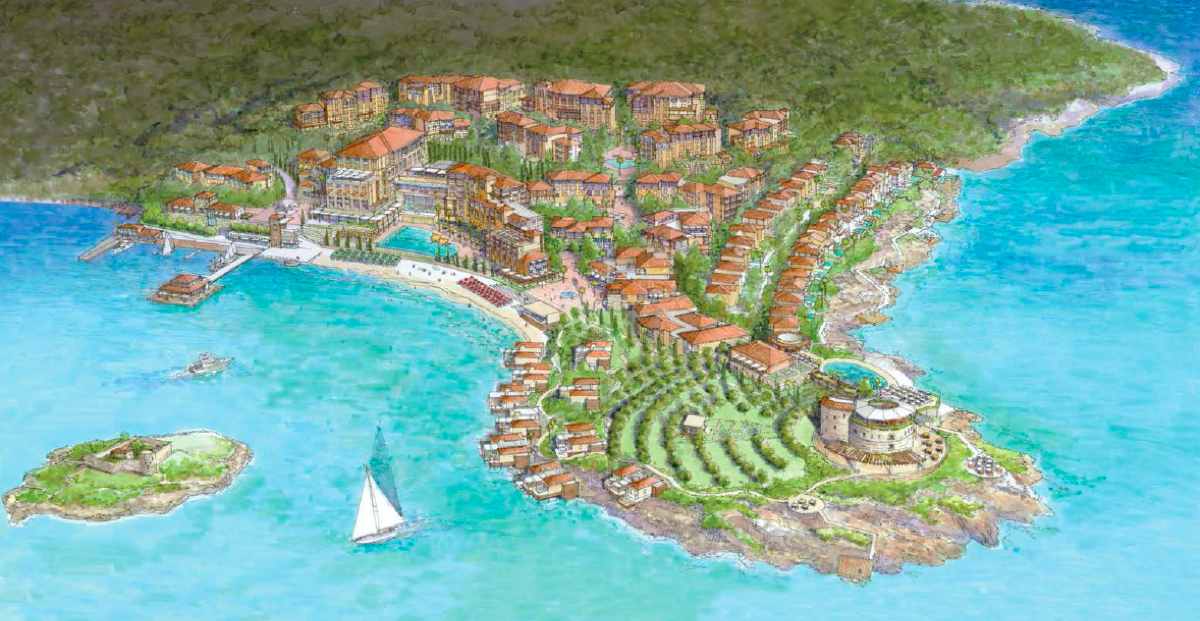 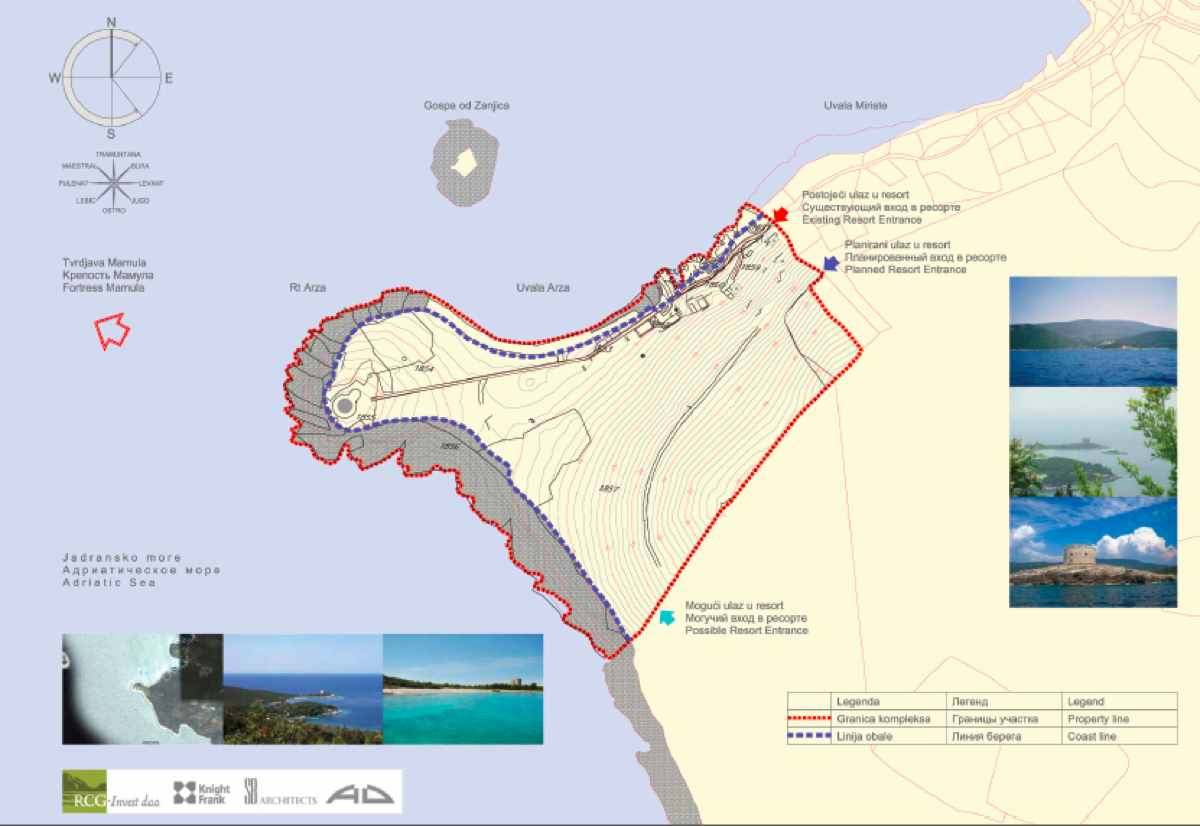